We’re thrown together in a shrinking and interconnected world. No wonder we write about each other. Yet if we try to speak from a culture not our own, we invariably end up writing, not about the Other, but about ourselves.

Enter speculative fiction and its subgenres: fantasy, science fiction, magical realism, slipstream, horror. In this varied and fast-expanding arena the writer invokes worlds in which the puzzling questions of human nature, prejudice, and power are given an imaginary setting—one with plenty of room for experimental thought.

Any culture is so complex as to be unknowable by one not born to it. Historically, the perpetrations and projections of some cultures on others have been the source of profound misunderstanding and abuse.

Yet we influence each other. We can’t help it. We rub shoulders, we swap words and superstitions, hairstyles and world views, recipes and songs; we intermarry, raise kids together, and color one another’s religious beliefs. Being humans, we have to talk about this grand exchange—and writing is a form of speech.

With its imaginary settings, speculative fiction provides an experimental forum where we can wonder, ask questions, speak our love and rage and grief. We can tackle the conundrums of blending cultures, examine the exploitation or misrepresentation that are a danger in any fiction. Speculative fiction is a multiverse in which we can give shape to who we are.

…and why write realistic fiction?

And how is it different from speculative fiction?

We say we know where Newton’s world ends and Tolkein’s begins, which realms are ruled by the periodic table of the elements and which by the stars. But do we? Whether we’re superstitious scientists, pragmatic witch-hunters, or ordinary folks living by the seat of our pants, we cross those boundaries constantly, usually unaware that we’ve crossed them.

Realistic fiction believes it lives scrupulously in a world that is “real”—or at least more real than the worlds of shamans and space aliens. Yet it must still deal with all aspects of our humanness: night visions, the mad gods who speak to us, the half-beliefs we formed at age three and never questioned; sexual fantasy; wish-fulfilment; unconscious, unexamined convictions that the infidel Other is the Devil and that we, the chosen, are little lower than the angels.

Realistic fiction must play with our struggle to find out what is literally real. That’s a wonderful and poignant struggle, worth seeing through…and it’s just as legitimate to expand that struggle into the realm of embodied metaphor. In other words, to write speculative fiction.

Depending on the story to be told, each genre has its virtues. Both invoke beings that enact our humanness. The beings of realistic fiction look more or less like our neighbors; those of speculative fiction can have tentacles, tripods, special powers, tails.

But no matter what they look like, they’re all us. 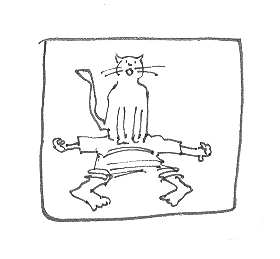 All material on this site, both text and graphics, is ©Betsy James, and may not be used commercially without her permission.